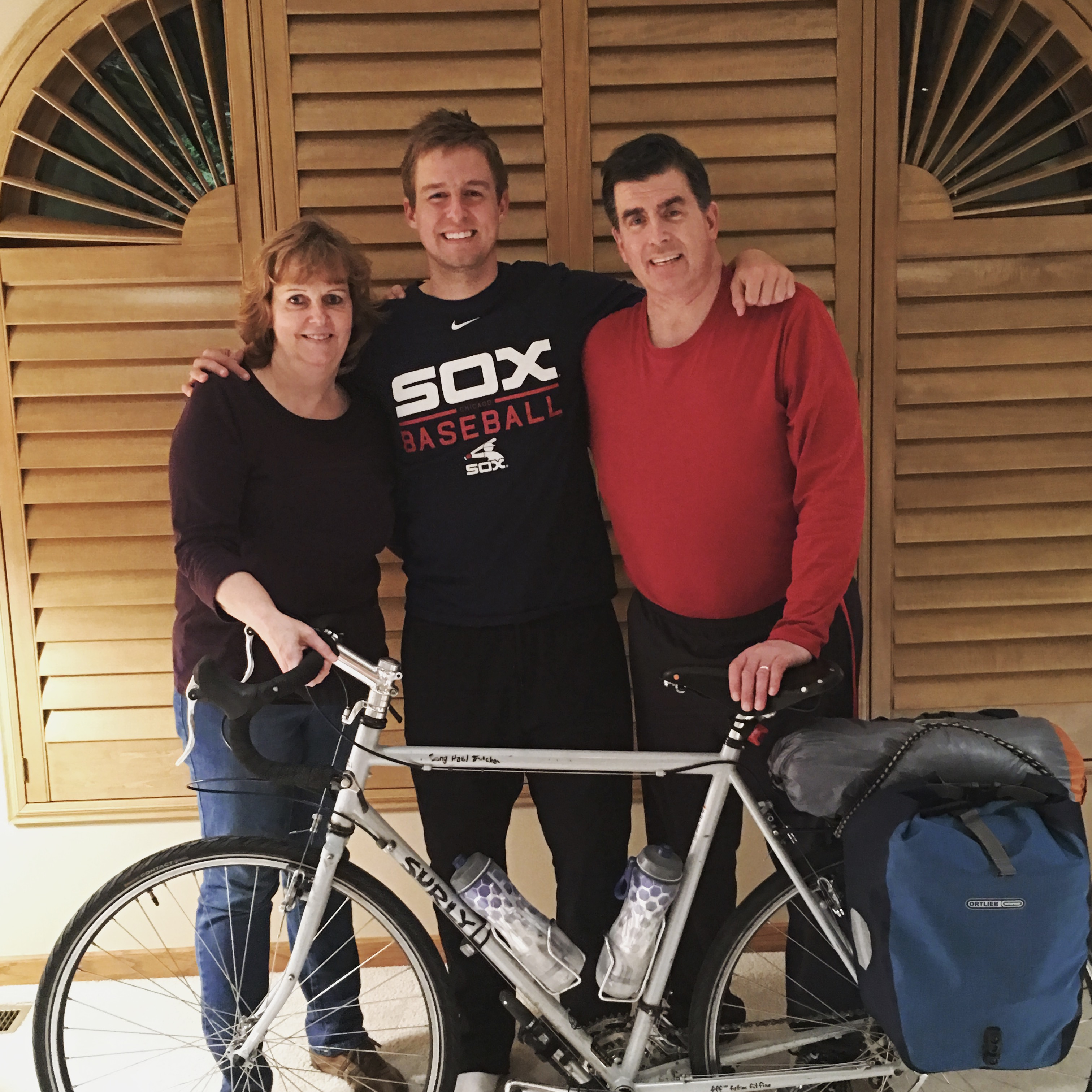 Packing time! If there is one thing that all of my travels have taught me is that you can never start packing too early. But that doesn’t mean that I didn’t start packing until the day before my train to Seattle. I think my mother was more frazzled by the last-minute packing than the 6-month, 11,000+ mile bike ride that I’m packing for (I even had a couple of straggler items being delivered the day that I was leaving…I will fully admit that was not my wisest decision). But we got everything together and as far as I know, I didn’t forget anything!

…but we’ll see about that when I actually start biking. So if you’re thinking “I can’t even fit one week’s worth of clothes into a carry-on suitcase…how the hell is he packing 6-months worth of gear into two glorified shopping bags?” Well let me explain! 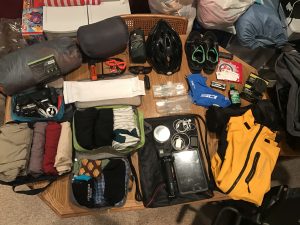 First things first, those “shopping bags” are my life. Panniers (the super technical term for “bike bag”). The blue Ortlieb panniers are the industry standard and are famous for being able to handle anything. Capable of holding up to 20lbs each. Completely waterproof. They’re pretty indestructible. Although I’m sure I’ll give a run for their money. As for the rest of the bikeframe, I have a Tubus Evo Cargo rear rack, which the panniers sit on. I then have some misc. mounts on the front of my bike for my GoPro, bike computer, and night light (purely for emergencies…Timmy’s #1 rule of bike touring: no night riding). 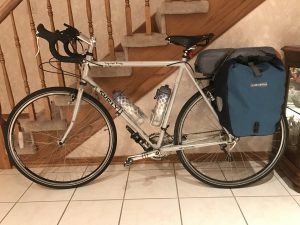 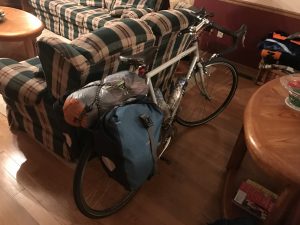 Now for all of the stuff crammed into the panniers. Everyone can rest easy knowing that I have plenty of different pairs of clothes, underwear, and socks where I will always have a fresh set for the day. Lol jk. Not even close. In terms of biking clothes, I have two pairs of shorts, one full jersey bib (think of shorts with overalls), two biking jerseys, one pair of biking/all-purpose pants, and one biking/all-purpose rain jacket, as well as some gloves, a hat, etc.. My mother claims that “you’re going to smell so bad, nobody is going to want to house you or go to games with you”. I think she was being dramatic, but still. As for normal clothes, I have one pair of zip-off pants, one pair of basketball shorts, two short sleeve shirts, and one lighter, long-sleeve shirt. In terms of socks/underwear? All you need to know is my socks/underwear packing cube isn’t much bigger than an IPhone (but shoutout to The Sock Guy for those awesome Chicago socks). 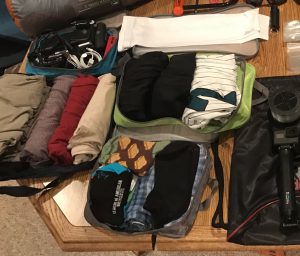 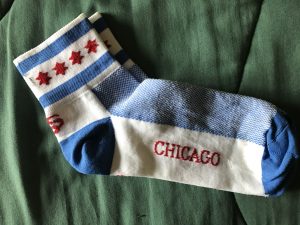 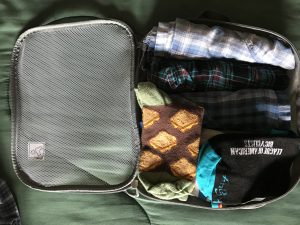 In terms of electronics and other random gear, it’s pretty straightforward. I have my phone, my bike computer for tracking my rides (Garmin 520), a GoPro and selfie stick (obviously, since I’m a millennial-ish), and IPad mini for blogging and Netflix. I pre-loaded the IPad with some TV series, but something tells me my family’s data plan is about to take a huge hit…sorry guys. I also have a 21,000mA external battery pack to allow me to function off the grid as long as need be. My tent is a REI Quarterdome tent, which is an insane piece of equipment, because it literally weighs only a couple of pounds. I also have two, 2L water bags for longer stretches between amenities. I figured that trying to cross the desert between San Diego and Phoenix on the 2L of water in my bottle cages might not be the smartest decision.

Overall, my bike unloaded (no panniers or tent attached) weighed 31.6lbs. Fully-loaded, the bike came in at roughly 50-51lbs., excluding water. I thought I packed relatively conservative, so I was actually kind of surprised how heavy it was, but I’m sure there are random things that I just won’t need (who needs three shirts for six months anyways…am I right?!) But for now, I’m pretty content with the loading. 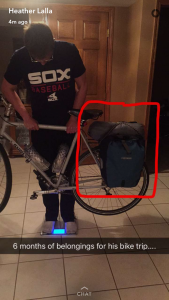 I said my goodbyes to my family and girlfriend, Anne (who thinks her poses on my bike below are hilarious…they’re not, I know). But all jokes aside, it was very tough and it’s extremely comforting knowing how much support I have behind me. They’re all fantastic. As I sit on the train to Seattle, I am feeling a massive rush of emotion. As I told Anne this morning, I would break it down as 60% excitement, 35% general nervousness, and 5% “what the hell did I really just sign off for”. But I think that’s normal for such an insane endeavor. Biking for Baseball is a great organization (see pics from our Milwaukee clinic we did before I left), supporting an even greater cause, and I have great people behind me, so I’m feeling confident. I’ve been planning this trip for two years now, having first contacted the B4B guys back at the start of Matt’s ride in 2015. I’ve sacrificed time with family/friends while working across the county to earn this time off from work. I’ve saved up every last cent to do this ride fully self-funded. I’ve trained hours upon hours to get into touring shape. And now that all of that is behind me, the only thing that’s left to do is to go for a bike ride! 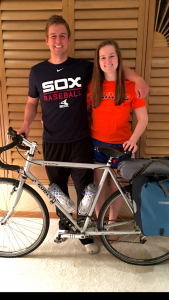 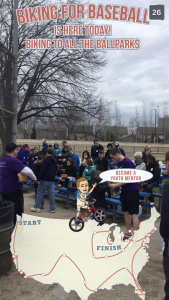 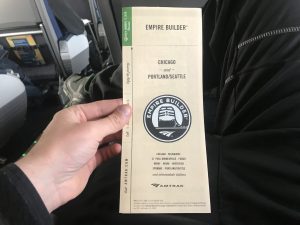 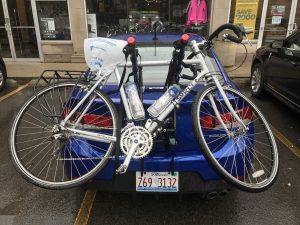 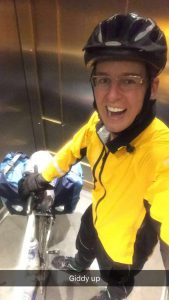 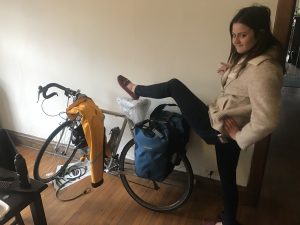 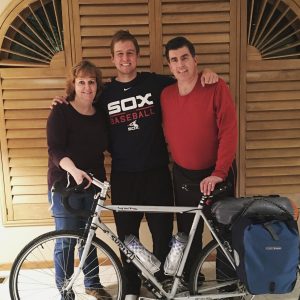